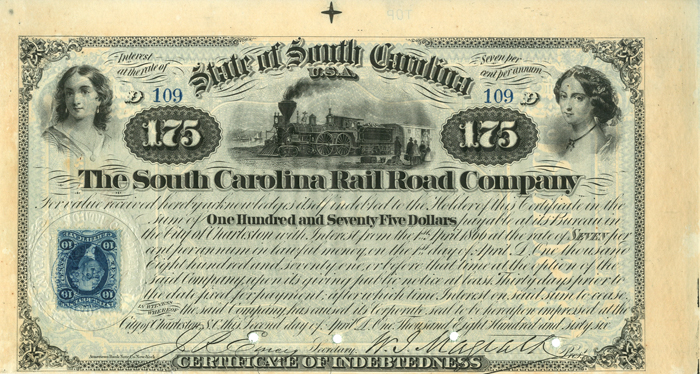 After 10 years of full operation, and the breakaway and reconsolidation of the LC&CRR, the South Carolina Railroad was still obliged by its original charter to connect with Camden. Despite hard economic times, and heavy debt inherited from the failed LC&CRR project, the 37.1-mile (59.7 km) branch between Kingsville, South Carolina and Camden, South Carolina was completed in 1848, fixing the route map for the next 50 years.

During the great prosperity and statewide railroad expansion of the 1850s, the SCRR enjoyed a doubling of its receipts but was obliged to focus on paying off debt, upgrading its physical plant and resolving inefficiencies in its route. After the Civil War, financial losses due to operations of Federal military forces were estimated at $1,438,142. Losses due to the downfall of the Confederacy were $3,803,917, including defaulted CSA bonds, uncollected transport charges and 111 emancipated slaves.

Competition crept in thanks to previous failure to expand. In 1867 the SCRR fought an unsuccessful frog war during construction of the competing Charlotte, Columbia and Augusta Railroad by interfering in the courts, claiming an exclusive charter for any railroad connecting Charleston, Columbia, Camden or Augusta. A grade crossing in Columbia was protested in court, then blocked by a parked train, then torn up physically and finally threatened by a steamed-up locomotive ready to move forward to block at any moment. All of these obstructions were quickly dismissed or prohibited.

With debt over $6 million in 1873, the line was unable to expand beyond investments in some collateral lines, including the Greenville and Columbia Railroad. In a pinch, "fare tickets" were found to be helpful. Widely accepted as currency, each unit was good for a 25-mile passage along the line.

The inclined plane at Aiken, South Carolina, was finally replaced by a modest rerouting and long cut in 1852. The terminus at Hamburg had never lived up to its promise, and the lack of an extension across the Savannah River to Augusta, Georgia, was an increasing embarrassment. After an attempt to gain control of the road bridge at Augusta, the SCRR finally overcame the resistance of local interests, built its own bridge in 1853 and made a direct connection with the Georgia Railroad in 1859. Local interests had also stopped the line at the city limits of the city of Charleston, greatly hampering connection to seaport terminals, and were not overcome until 1885.

Piers of the 1853 Savannah River bridge at Augusta are still visible.