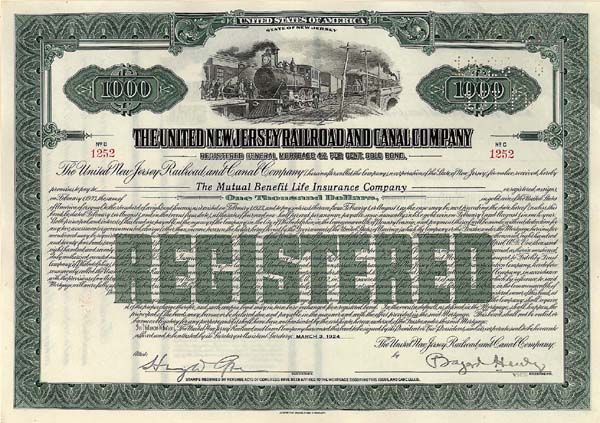 Years: 1924
Color: Gr
$1,000 Railroad Bond. Absolutely gorgeous bond with two trains in a station. Great quality from American Bank Note Co. The United New Jersey Railroad and Canal Company (UNJ&CC) was a railroad company which began as the important Camden & Amboy Railroad (C&A) whose 1830 lineage began as one of the eight or ten earliest permanent North American railroads, and among the first common carrier transportation companies whose prospectus marketed an enterprise aimed (with a priority or principally) at carrying passengers fast and competing with stagecoaches between New York Harbor and Philadelphia-Trenton. Among the other earliest chartered or incorporated railroads, only the Mohawk and Hudson Railroad and Baltimore and Ohio Railroad were chartered with passenger services in mind.[a] Later after mergers as the UNJ&CC became a subsidiary part of the Pennsylvania Railroad (PRR) system in New Jersey by the later merger and acquisition of several predecessor companies in 1872; which purchases also included the PRR's main line to New York City (now Amtrak's Northeast Corridor). Prior to 1872, its main lines were the Camden and Amboy Rail Road and Transportation Company (C&A, below), the first railroad in New Jersey and one of the first railroad in the United States. The Camden and Amboy was the first railroad to be conceived primarily as a passenger railroad and the first to employ steam locomotives to replace animal powered vehicles on rails. C&A first purchased and operated (what is now the oldest surviving operable steam locomotive in the world today) the John Bull, imported from Great Britain ca. 1832. Its operations also lead to the important development of the iron T-rail type rail tracks that became standard around the world. The United Company also included the Delaware and Raritan Canal, an early foe and then friend of the C&A. The new conglomerate also included the New Jersey Rail Road and Transportation Company, the first railroad across the New Jersey Palisades. The first railroad charter in the United States was issued on February 6, 1815 to the New Jersey Railroad Company. Its proprietors included the famous inventor John Stevens. Based on turnpike charters, it allowed the company to build between New Brunswick and Trenton, and became a model for railroad charters in the future. The Robert Stevens discussed below was the son of John Stevens. In the early 19th Century, travel between New York and Philadelphia, then America's two largest cities, was difficult and expensive. In 1800, a trip between the two cities could take as long as eleven hours on a good day and as long as twenty on a bad one. In 1829, eager to reduce the cost and difficulty of travel, New Jersey began investigating a cross-state canal and railroads. Railroads had already met with success in Britain and several American cities were planning lines of their own. The legislature, amid very aggressive lobbying, decided to build both a canal and a railroad. The canal and the railroad were to be built parallel to each other and controlled by separate companies chartered by the legislature. Each corporation was to give the state $100,000 worth of stock and pay a transit tax levied on cargo and each passenger carried. The corporation chartered to build the canal complicated this arrangement by deciding to also build a railroad. The legislature responded with a so-called "Marriage Act" to combine the two companies.

Item ordered may not be exact piece shown. All original and authentic.
OUT OF STOCK
Request re-stock notice?
Email this to a friend
Request Info
Previous Item (Union Street RR - Bond)    (Virginia and Carolina Southern Railroad Co. - Bond) Next Item